Database Architecture
In Oracle, a database refers to the entire Oracle RDBMS environment and includes the following components:
• Oracle database processes and buffers (instance).
• SYSTEM tablespace containing one centralized system catalog, which is made up of one or more datafiles.
• Other optional tablespaces as defined by the database administrator (DBA), each made up of one or more datafiles.
• Two or more online Redo Logs.
• Archived Redo Logs (optional).
• Miscellaneous files (control file, Init.ora, Config.ora, and so on).
A database in Microsoft SQL Server 2005 refers to a physical grouping of set of schema objects of a database into one or more physical files. Databases are classified into system-defined database and user-defined database within SQL Server 2005. The system databases consist of the system data and also controls the temporary storage required for application data. The application data is available in a SQL Server user-defined database.
An instance of SQL Server can support multiple databases. Applications built using SQL Server can use databases to logically divide business functionality. There can be multiple instances of SQL Server on a single computer. Each instance of SQL Server can contain multiple databases.
Each SQL Server database can support filegroups, which provide the ability to physically distribute the placement of the data. A SQL Server filegroup categorizes the operating-system files containing data from a single SQL Server database to simplify database administration tasks, such as backing up. A filegroup is a property of a SQL Server database and cannot contain the operating-system files of more than one database, although a single database can contain more than one filegroup. After database creation, filegroups can be added to the database.﻿

Figure 1: Oracle tablespaces and SQL Server databases compared.
Microsoft SQL Server also installs the following databases by default:
• The model database—a template for all newly created user databases and tempdb.
• The tempdb database—is similar to an Oracle temporary tablespace in that it is used for temporary working storage and sort operations. Unlike the Oracle temporary tablespace, users can create temporary tables that are automatically dropped when the user logs off.
• The msdb database—which supports the SQL Server Agent and its scheduled jobs, alerts, and replication information.
• The AdventureWorks and AdventureWorksDW databases—are sample databases for testing and training purposes that can be optionally installed.
Physical and Logical Storage Structures
The Oracle RDBMS is comprised of tablespaces, which in turn are comprised of datafiles. Tablespace datafiles are formatted into internal units called blocks. The block size is set by the DBA when the Oracle database is first created. When an object is created in an Oracle tablespace, the user can specify its space in units called extents (initial extent, next extent, min extents, and max extents). If no extent size is explicitly defined, a default extent is created. An Oracle extent varies in size and must contain a chain of at least five contiguous blocks.
SQL Server utilizes a fixed 8 KB page size which is the basic unit of IO. To better manage pages, SQL Server organizes these pages into groups of eight pages which are physically contiguous to each other, called extents. Although IO is performed a page at a time, space is managed in terms of extents. Each page belongs to one object and is of one type (data, index, GAM, IAM, etc), but an extent may belong to multiple objects (up to eight).
An extent that has all eight pages belonging to the same object is referred to as a Uniform Extent; otherwise, it is referred to as a mixed extent. Although a row may not span more than one page (8060 bytes – page minus header space), SQL Server 2005 may move data to ROW_OVERFLOW_ALLOCATION unit. Extents live within a filegroup. The following diagram provides a graphical comparison of how blocks and extents in Oracle map to pages and extents in SQL Server. 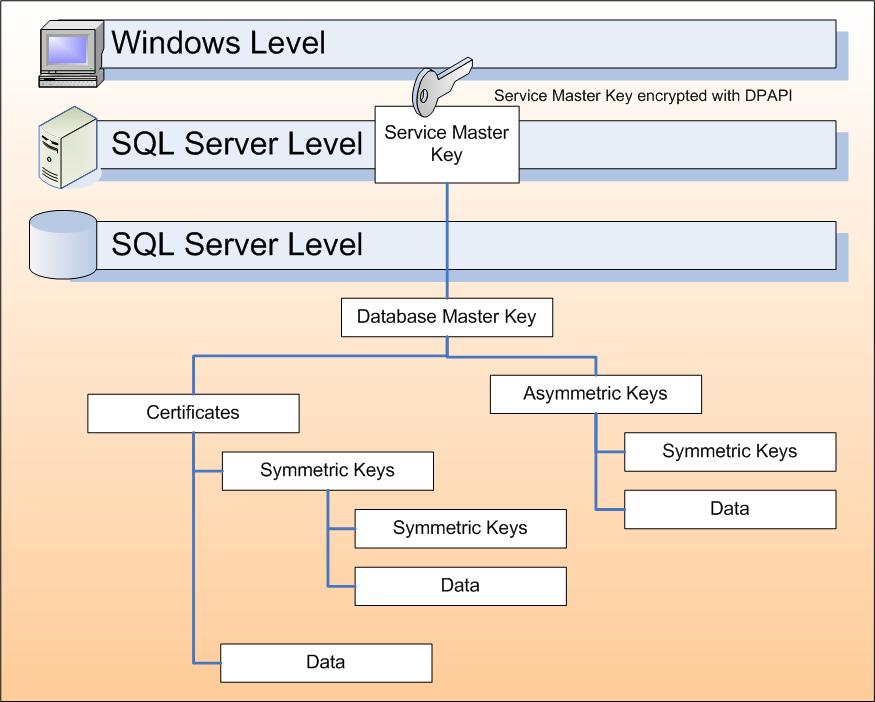 Figure 4: SQL Server data encryption
Each SQL Server instance has a Service Master Key, created automatically during setup, which is encrypted with a Data Protection API (using the credentials of the SQL Server service account) provided by the underlying Windows Server 2003 operating system. Its main purpose is to secure system data, such as passwords used in instance-level settings such as linked servers or connection strings).
The Service Master Key is also used to secure each of the Database Master Keys (protected additionally with a password supplied when a Database Master Key is created). Within each database, its master key serves as the basis for creating certificates or asymmetric keys, which subsequently can be applied to protect data directly or to further extend the encryption hierarchy (i.e., by creating symmetric keys). Creation, storage, and other certificate and key management tasks can be handled internally within SQL Server, without resorting to features of the operating system or third party products. Encryption and decryption is provided by pairs of functions complementing each other such as EncryptByCert() and DecryptByCert().
Data Movement and Tools
Data Export/Import tools
SQL Server 2005 also has a collection of data movement and loading tools. The BULK INSERT and bcp commands (similar to Oracle’s SQL*Loader) have a long history of performing insert operations. DTS was often the tool of choice in SQL Server 2000 when transformations were required on the data despite is relatively basic set of features.
SQL Server 2005 now offers an exciting new tool called SQL Server Integration Services (SSIS). SSIS allows the integration of managed code in the data and control flow tasks to get the precise results needed for transformations and the ultimate destination of the data. It is a true ETL tool that efficiently gets data where it is needed by eliminating the need for multiple staging tables. SSIS uses a “pipeline” architecture and massages the data on its way from the source to its destination. The pipeline may also be a data source for Data Mining so that “real-time” data mining may be implemented.
With SSIS, users now have an industrial strength ETL tool bundled with SQL Server at no additional cost. Oracle does have an ETL tool but it is part of the Oracle Warehouse Builder which is sold as part of the Internet Development Suite.
Moving Databases
Similar to Oracle’s transportable tablespaces feature, SQL Server provides a simple way to move databases from one instance to another. The move can be a logical and/or physical move and the difference in execution is minimal and the operations can be performed via SQL Server Management Studio or command line using T-SQL. To move a SQL Server database from one instance to another, you only need to detach the database from one instance and attach it to another. If physical movement is necessary, simply move the datafiles and log files associated with that database to the desired new location before attaching to the new instance.
Moving to different platforms is irrelevant in SQL Server since it only runs on the Windows platform. However, the process to move from one edition or version of Windows to another is done the same way as moving within the same edition or version. Do note that different versions/editions of Windows have different levels of functionality so please be aware of your database’s requirements prior to moving.

Data Replication
Replication is a set of technologies for copying and distributing data and database objects from one database to another and then synchronizing between databases to maintain consistency. Using replication, you can distribute data to different locations and to remote or mobile users over local and wide area networks, dial-up connections, wireless connections, and the Internet. SQL Server 2005 supports all popular types of replication including transactional, peer-to-peer transactional (aka multi-master), merge and snapshot. SQL Server also supports replication with non SQL Server databases including Oracle.
Implementation methods and requirements will differ depending on the type of replication needed but for all practical purposes, these models deliver on most of the combined capabilities provided by Oracle replication and Oracle Streams. Setting up, monitoring and managing replication can be done through SQL Server Management Studio or through T-SQL and some replication system stored procedures.
Conclusion
Microsoft SQL Server 2005 is a comprehensive, integrated end-to-end data management solution that empowers users across the organization by providing them with a secure, reliable, and productive platform for enterprise data and business intelligence (BI) applications. SQL Server 2005 delivers powerful and familiar tools to information technology professionals and information workers.
SQL Server 2005 is designed with goals to increase business value through reduced TCO, ease of use and extensive integration capabilities for information management. SQL Server 2005 also offers various services and infrastructure to deploy Business Intelligence systems with significantly reduced development and integration effort. Further capabilities offered by features like Service Broker and Query Notification allows today’s IT Professionals to design and deploy both classic client/server and web applications, and more advanced web services based applications with service oriented architectures.